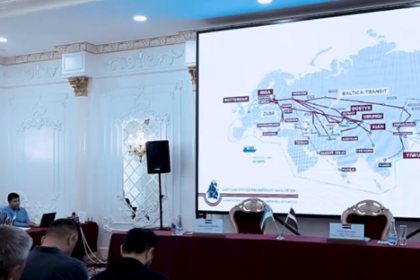 On November 2-4, in the capital of Uzbekistan, in the city of Tashkent, the international transport exhibition TransLogistica Uzbekistan 2022 was held, in which, under the single brand VIA LATVIA, a delegation of the transport industry of Latvia also participated under the leadership of the Deputy State Secretary of the Ministry of Transport, co-chairman of the Latvian-Uzbekistan Working Group on Transport Uldis Reimanis. The Latvian stand at the exhibition was widely visited and received the Best National Group Exposition Design award.

Within the framework of the visit, a business seminar was organized for entrepreneurs of Latvia and Uzbekistan under the leadership of U. Reimanis and the co-chairman of the Latvian – Uzbekistan Working Group on Transport from the Uzbek side – Deputy Minister A. Muminov.

Opening the event, U.Reimanis emphasized: “Cooperation between Latvia and Uzbekistan in the field of transport has been developing very purposefully and dynamically this year. A delegation led by the Minister of Transport of Uzbekistan I. Makkhamov visited Latvia, a meeting of the Latvian-Uzbekistan Working Group on Transport was held, as well as several meetings of industry experts and entrepreneurs. All these events confirmed the readiness of the transport industry of our countries, as well as the ability to actively engage in the dynamic process of Eurasian transportation.”

After the seminar, a B2B contact exchange between entrepreneurs of Latvia and Uzbekistan was held, within which valuable contacts were established, and the Freeport of Riga Authority, the Freeport of Ventspils Authority and the stevedoring company of the Liepaja SEZ “Terrabalt” signed a memorandum of cooperation with the Uzbek side.

The significance of the event was also emphasized and covered by the mass media of Uzbekistan.

During the visit, during the meeting of U.Reimanis with Deputy Minister A.Muminov and Deputy Minister for Aviation Zh.Choriev, topical issues and opportunities for expanding cooperation, especially in attracting cargo for transportation along the Latvian transport corridor, were discussed.

As part of the Latvian delegation, representatives of the SJSC “Latvijas Dzelzceļš”, the Freeport of Riga, the Freeport of Ventspils and the Liepaja FEZ, the association of road carriers “Latvijas Auto”, the association of stevedoring companies of Latvia, as well as representatives of the management of several port terminals participated in the events.